Well, I had another great send off from Amicalola Falls State Park on Thursday, April 18, 2013 as I started my hike from the AT approach trail up to the top of Springer Mountain. Mary, (Mrs. Whitewater) and Jackson drove around that afternoon to meet me on the summit. It was a beautiful day and I think Jackson had a ball! 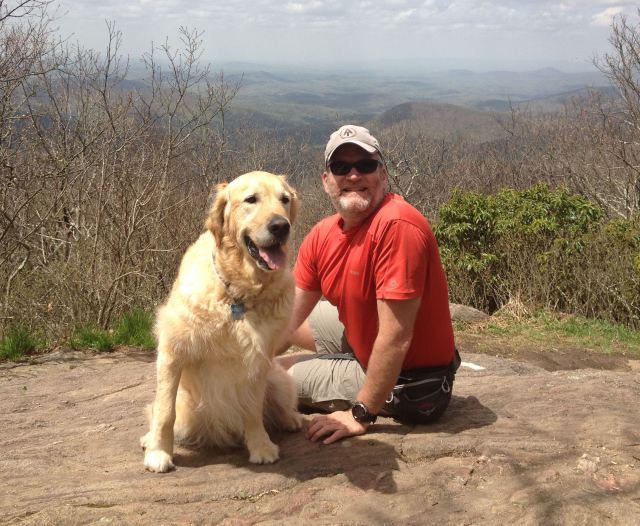 So, where do I start telling you about my trail journey? The BMT is often refered to as a brother/sister trail to the Appalachian Trail. After thru hiking it, I think the family must be pretty upset with the BMT because it appears to me that it is the red-headed step child of the family. It’s my feeling it has been abandoned to some degree. While the trail has some very well marked and maintained areas, I found just as many miles where the trail was hardly visible at all in my opinion and very difficult to follow. The tough areas pretty much lay between the end of Jacks River or Daily Gap (if you missed the BMT trail intersection like I did) in Georgia to the Twentymile Ranger Station at the entrance to the Great Smoky Mountain National Park (GSMNP).

Just a few photos of what the trail really looks like below…this stuff goes on and on! 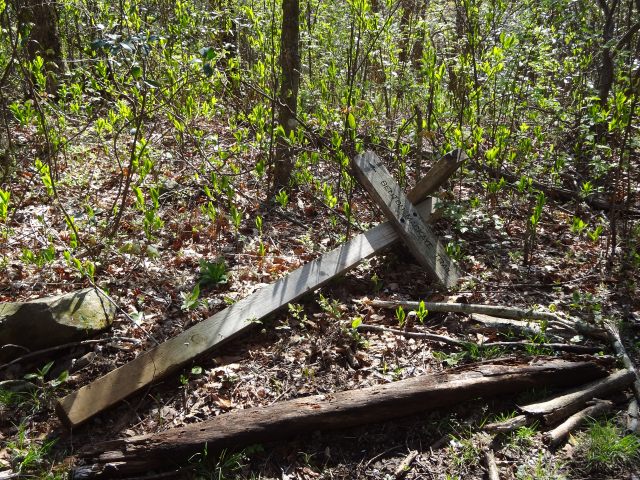 With all that said …the BMT is still a fairly new trail.  It officially opened on July 16, 2005 and is mostly maintained and funded by volunteers and donations. I do realize that it has taken many, many volunteer hours to get the trail established.  I do appreciate the hard work. THANK YOU!

Did I have fun? I would still have to say YES, but I did find it very hard to mentally keep in sync with the trail this year. The weather was pretty much mostly wet and rainy with unusually cool temperatures for this late in spring. Last year on my Appalachian Trail thru hike, I never even spent one night camping alone. I didn’t plan it that way, that’s just the way it worked out. On my Benton MacKaye trip, I only shared a campsite twice with fellow hikers and that was when I was already in the Smokies. I could easily count the number of hikers on one hand that I saw on the entire BMT.  All of whom were basically day hikers. So my journey was really about three weeks of solo hiking with very limited to no people interaction. I always thought that I enjoyed solitude, but I’ve since learned that more than a week is too much.

During my first real weekend on the trail, I found myself waiting out one of the many rain monsoons that took place on my trip just hanging out in a bunk house for three nights at the Hiwassee River Outfitters in Reliance, TN. This place was completely quiet and dead. I became the “chief security guard” on the property, basically because there was no one else around and no other place to visit within walking distance. The Hiwassee River Outfitters doesn’t open for business until Memorial Day weekend each year. I watched it rain and rain for two and a half days with zero entertainment. I was able to find one location on the property that I could call out to Mrs. Whitewater a few times between the almost constant rain throughout the weekend. I know now what solitary confinement in a prison must feel like, but at least they get three meals a day, TV, and a recreation hour! Being stuck in an empty bunk house in Reliance, TN was a pretty horrible experience to say the least.

Now, on to all the good stuff about the BMT which still far out weighed the bad.

After completing the 8.8 mile AT approach trail and enjoying some time with Mrs. Whitewater and Jackson on top of Springer Mountain, I began my journey on the BMT. For the first few miles the trail winds down Springer, occasionally crossing and sharing the same path with the Appalachian Trail.  The BMT also follows a portion of the old original AT, which I understand was rerouted after 1957. Looping further west, the BMT crosses Chester Creek a couple of times before Three Forks (Chester is one of the creeks that make up Three Forks) about 6 miles from the top of Springer. I made camp the first night at Three Forks and what a beautiful spot it was.

The next day after leaving Three Forks I hiked over The Bald, Wildcat Ridge, across the Toccoca River Bridge, and back up and over Mount Toonowee onto GA60.  Then I hiked down the road to Skeenah Creek Campground for the night to dry out from all the rain. 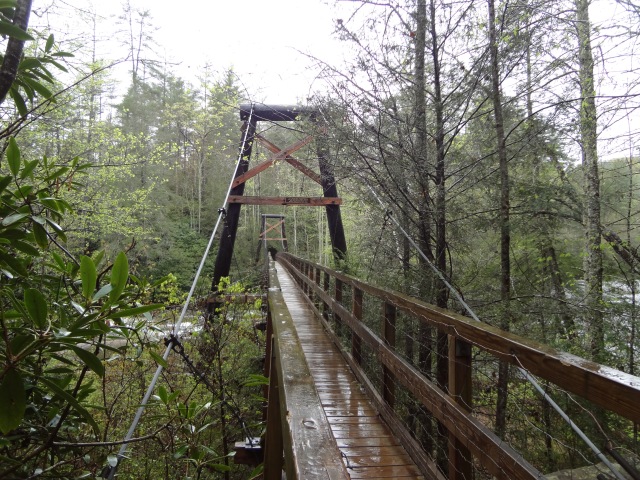 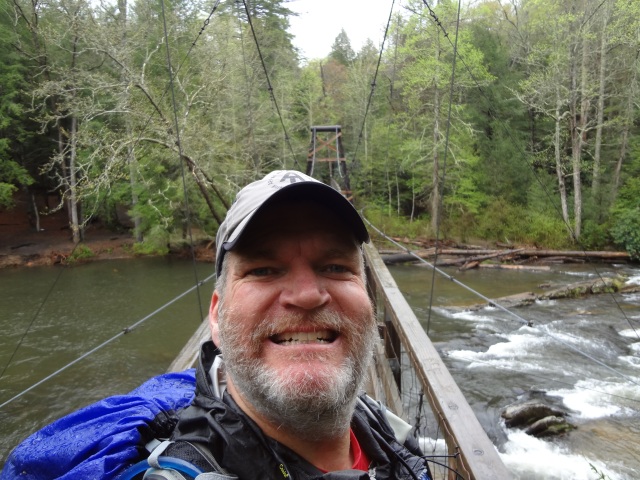 After leaving the Skeenah Creek Campground, I made my way toward Blue Ridge, GA. 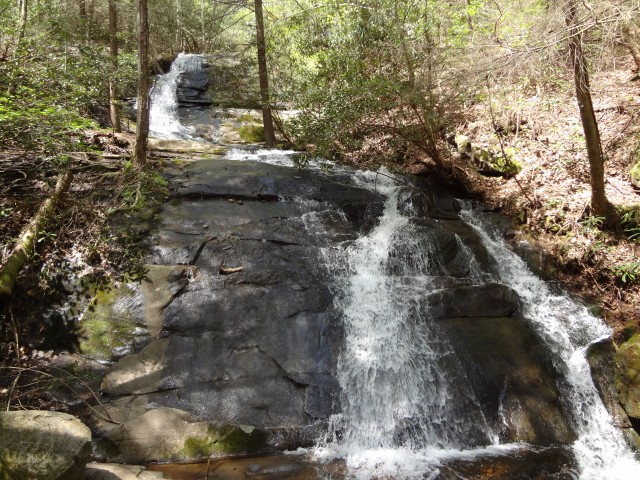 If you like fording creeks and streams, then the BMT would be for you. I honestly lost count of how many I crossed, but it was a lot! The heavy rains made for a couple of really epic crossings with the water well above my waist. All I could think about was how long it would take someone to find me if I got into trouble! 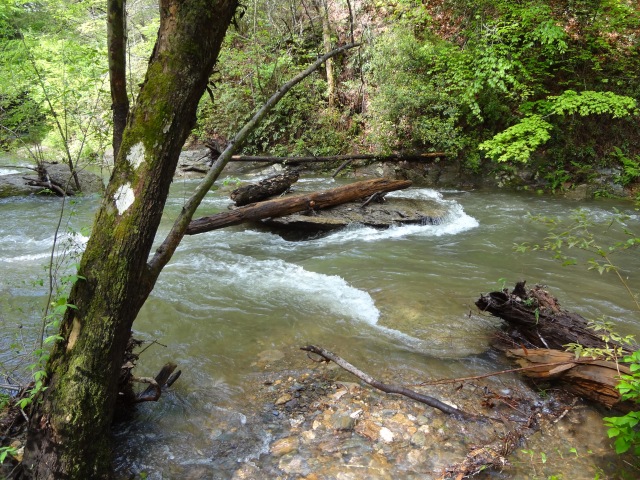 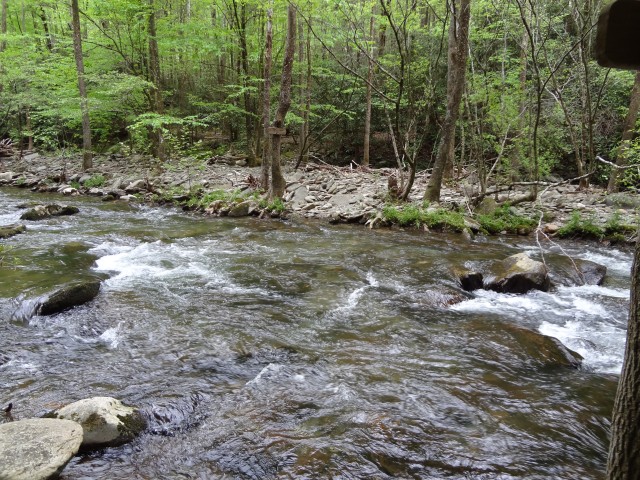 Before entering the Great Smoky Mountains, I was able to get to Deals Gap, TN on a Friday night before another weekend long rain out. At least this time I had some people around, a TV, and a place to grab a burger. Life was good!

Deals Gap Motorcycle Resort is just that, a place where motorcycle enthusiasts come from all over to ride the famous Dragon. The 11-mile stretch of the Dragon in Tennessee is said to have 318 curves. Some of the Dragon’s sharpest curves have names like Copperhead Corner, Hog Pen Bend, Wheelie Hell, Shade Tree Corner, Mud Corner, Sunset Corner, Gravity Cavity, Beginner’s End, and Brake or Bust Bend. The road earned its name from its curves being said to resemble a dragon’s tail. The Dragon also seems to be a very popular destination now for Mini Cooper owners as well.

On Monday, the skies began to clear and I was able to leave Deals Gap and head into the Great Smoky Mountains National Park. Upon arriving at the Twentymile Ranger Station, I tried to make a backcountry reservation using the phone provided by the park service, but it was out-of-order. I proceeded on without a permit and truly didn’t feel one bit bad about it.

After several miles, I took a detour on the AT and went up to the Shuckstack fire tower. What a great view! The fire tower is old and dilapidated, a scary climb up, but what fantastic panoramic scenery awaits from the top.

For the most part, the Smoky Mountains provided some better ways of crossing the creeks and streams. 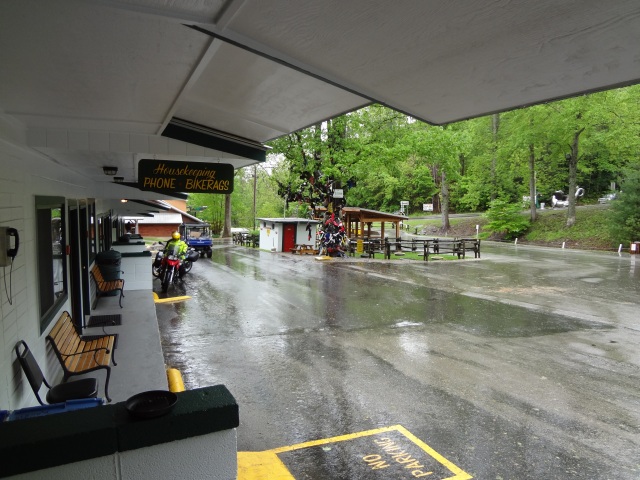 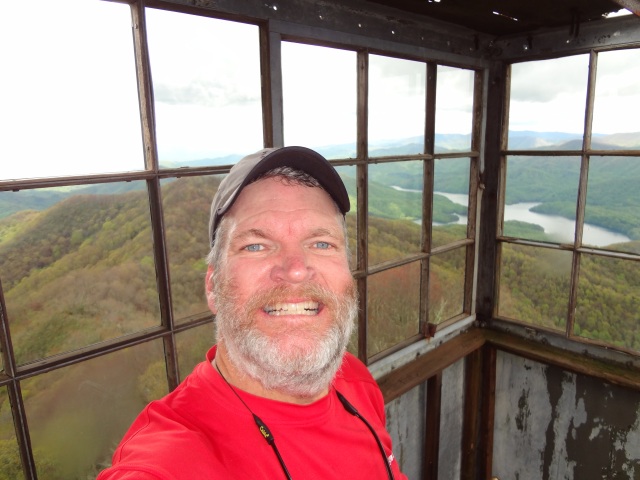 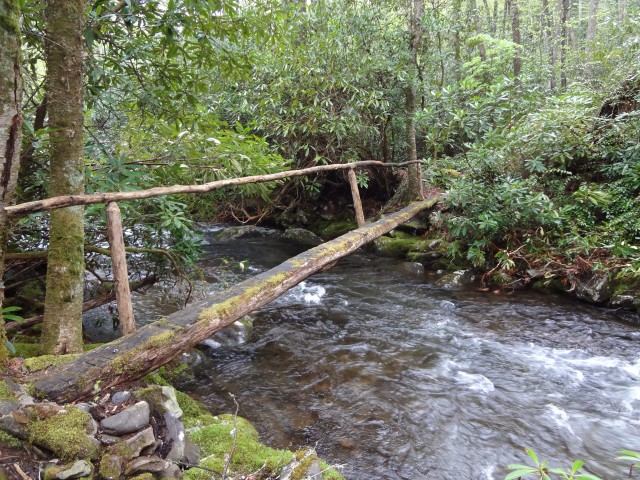 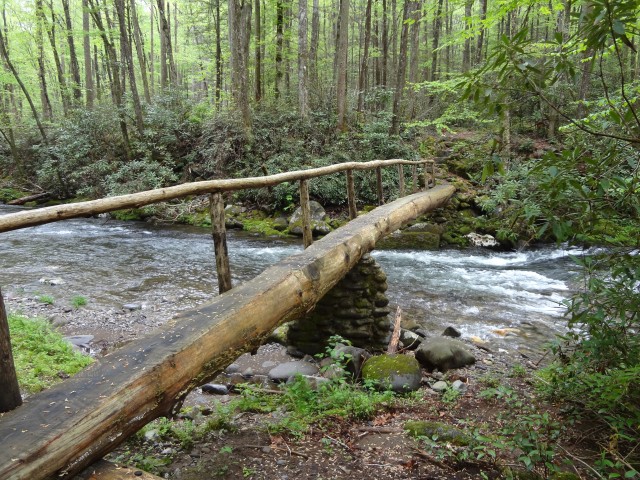 During my first three days in the Smokies, I covered 66 miles of trail and arrived at  Newfound Gap a day earlier than I had expected. So I camped at the Smokemont Campground there in the park. My camping neighbors were very nice. One couple brought me coffee in the morning and another couple brought me a bag of home-made cookies. I’m guessing they probably felt sorry for me and thought I may have been a bum or something. That’s a pretty common thing that can happen when you’re living in the woods for too long . Mrs. Whitewater drove up the next day and we toured the park and drove on into Cherokee, NC for the evening. What a great time we had and I enjoyed just relaxing. The shower, clean clothes, and food were a welcome change as well.

On my last night in the Smokies, which was also my last night on the BMT, I stayed at the Laurel Gap Shelter. I arrived very early, before noon, having covered only about nine miles so far for the day. The weather was rainy and I didn’t really want to summit Mount Sterling on an ugly day. I’m glad I waited because the next day was clear and beautiful. I enjoyed my walk up to the summit of Mount Sterling, which is also the highest point on the BMT at 5,842 feet. I took in the views from another old fire tower that still stands on its summit. From there I dropped down more than 4,000 feet to the bridge over Big Creek which is basically the end of the Benton MacKaye Trail (BMT). 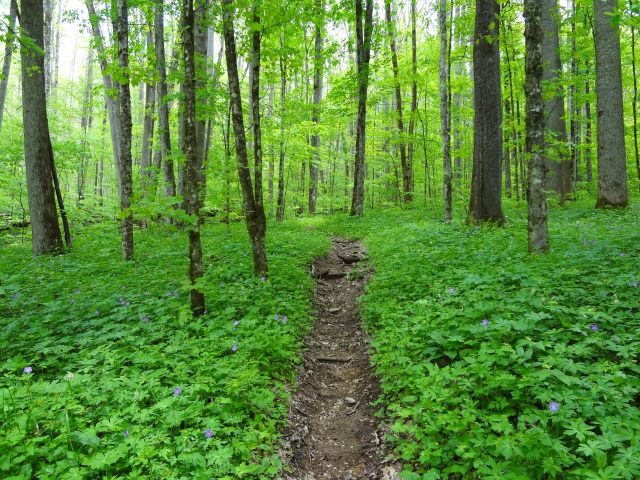 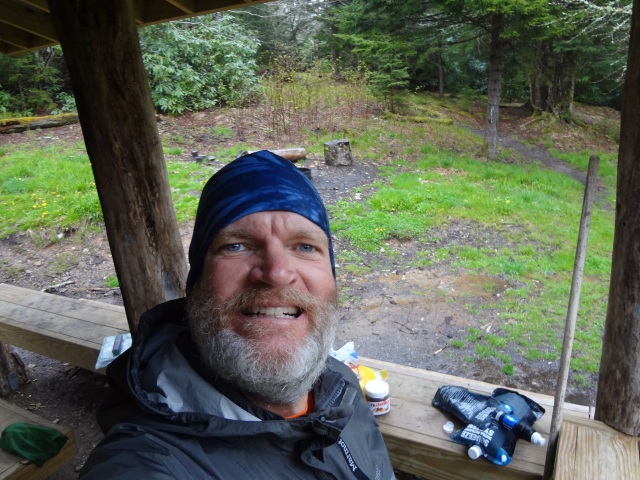 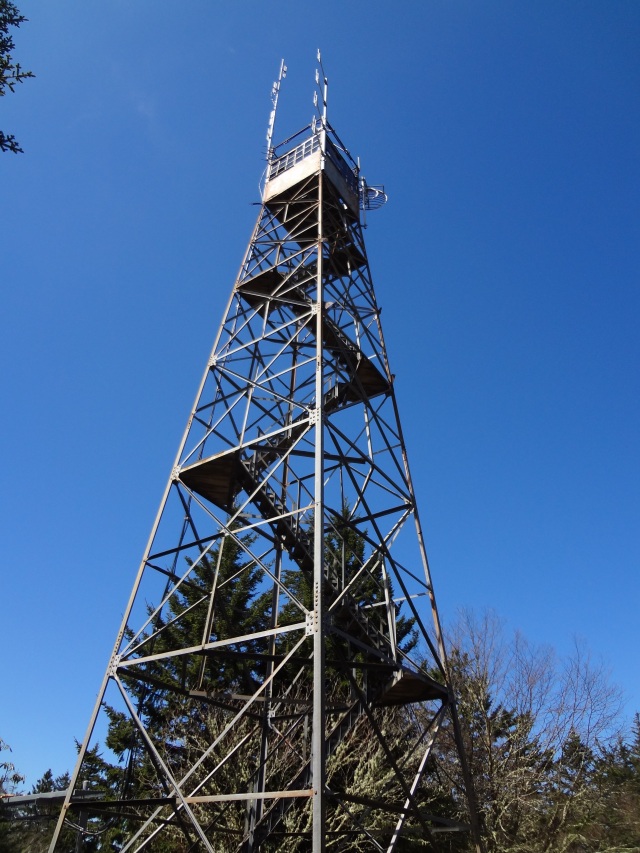 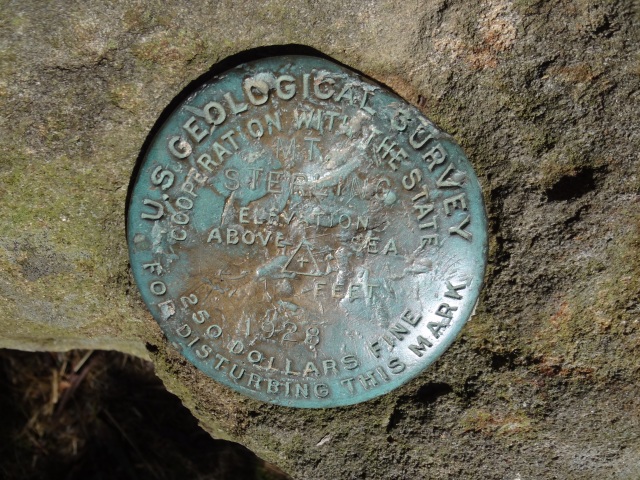 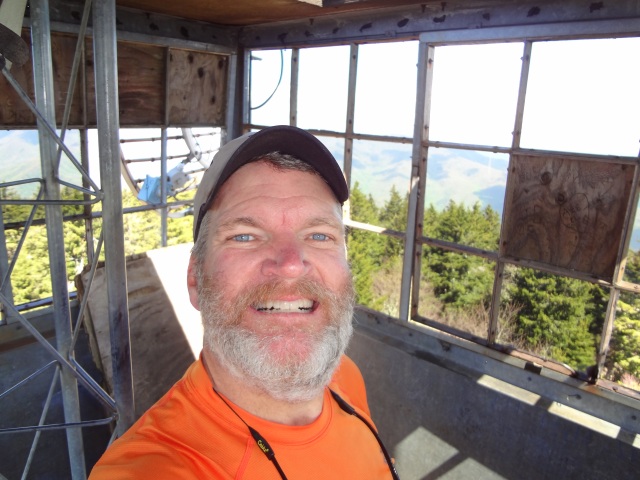 I spent two additional days hiking north on the AT before ending my hike in Hot Springs, NC. The AT was like hitting a major interstate! It was so well marked and full of people hiking north and south! On my thru-hike last year I had to hurry across Max Patch due to the weather. This year I had great weather and really enjoyed just taking my time across this beautiful area. 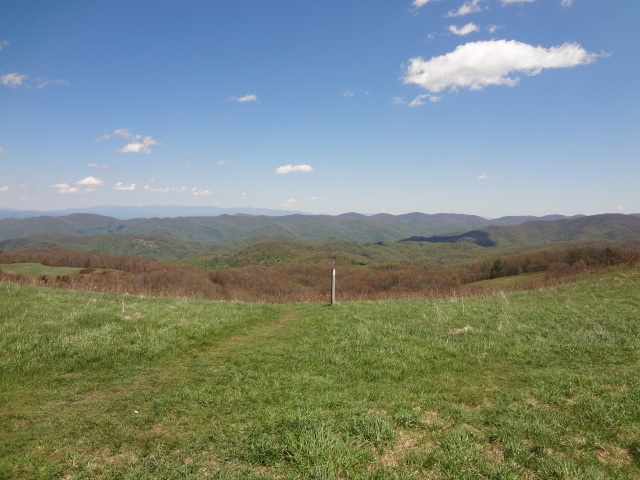 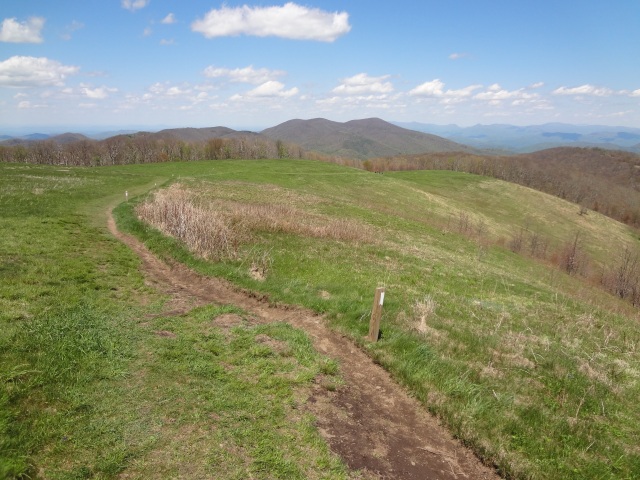 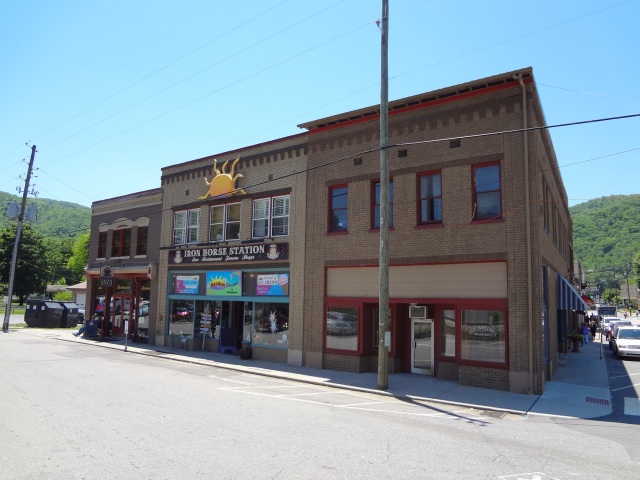 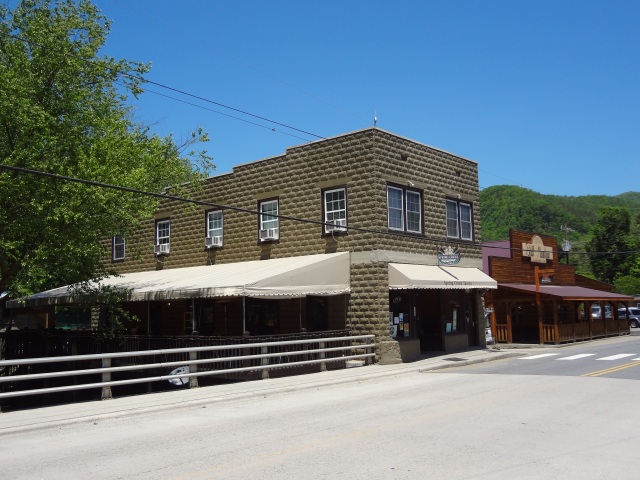 This entry was posted in Trail Updates. Bookmark the permalink.

25 Responses to My Benton MacKaye Trail (BMT) Thru Hike